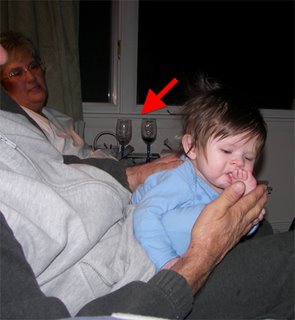 Seth is forever trying to eat his toes, but he just can't reach. Here, Grandpa is kindly helping him.

Those wine-drinking lushes are teasing my poor baby boy! I better keep on saving for those therapy bills.

Written on Wednesday, November 22, 2006 by Jessica

Happy Turkey Day, Happy Thxgiving, and all that. Don't spend too much on Black Friday.

I'm worse than I imagined

I found this in an old entry in Big Mama's "other" blog.

A national nurse-in at Delta ticket counters is set for today. I wish I would've known. The nearest Delta ticket counter is about an hour-and-a-half from here. It's a little too late to just take off and go. And who says Seth would want to eat just then anyhow? (Picture me shoving his face into the milk maker, shouting, "Eat, child, eat!")

On the other hand, I feel a little sorry for Delta. This is turning into a PR nightmare, and technically, Delta didn't kick off the woman. A partner airline, Freedom Airlines, is the one that did it. I was aware of this when I wrote my complaint e-mail, of course, but I still knew Delta would have to be the one to put pressure on Freedom to change its policy. And it's working.

Sorry, Zoe. Come back next week when I'm finally over my righteous indignation. I'll try to start writing about another subject. :)

Update on my Delta complaint letter

Thank you for expressing your concerns.

Delta Air Lines is disappointed to hear about the removal of the passenger onboard Freedom Airlines Flight 6160. As you may know, they are one of our Delta Connection partners. The employees involved were Freedom Airlines employees. No Delta employees were involved in the decision to remove Mrs. Gillette from the aircraft.

Delta supports a mother's right to breastfeed her baby onboard our aircraft. Please let me assure you that we are working with Freedom Airlines on their investigation of this matter. Following the results of this internal investigation, Delta will work with Freedom (a subsidiary Mesa Air Group) to ensure that their procedures mirror Delta's service standards.

Again, thank you for contacting us. We will always welcome the opportunity to be of service.

We genuinely appreciate your support and trust.

I'm satisfied with Delta's response. I'm willing to fly their airline again, assuming that it actually does put the squeeze on Freedom Airlines over this incident.

They staged a nurse-in.

You know you're a hick when...

Written on Wednesday, November 15, 2006 by Jessica

...they cancel school on the opening day of deer season.

Woman kicked off flight for breastfeeding

Written on Wednesday, November 15, 2006 by Jessica

Remind me to never fly Delta.

I wrote an email to bitch:

I'm appalled that a family was kicked off a Delta Connections flight because the mother was breastfeeding. The flight attendant and the airline should've used better judgment. http://www.msnbc.msn.com/id/15720339/

I'm aware that Delta and Freedom Airlines are different entities, but Delta should exert its influence to stop such nonsense in the future.

I have to admit, I've written better complaint letters. What's this business about low-cut tops? Oh, well. I was pissed when I wrote it. I'm thinking about following up with a better-written paper letter.

Update: By the way, I learned about this incident at Working Moms, a new site for (you guessed it) mommies who work.

Written on Wednesday, November 08, 2006 by Jessica

I never even mentioned that Baby's Daddy (i.e., Husband) came home on Saturday. He killed a spider for me this morning.

Posted in Fear and loathing in the blogosphere, Miscellany | Comment Now!

STOP THE PRESSES! I received very important CNN breaking news in my mailbox:

Someone please shoot me. Why does this deserve breaking-news treatment? I don't give a rat's ass about ol' Brit and her hubby.

Don't they know that today is election day? Isn't there any news more worthy of my attention?

Today I did something I've never done before. I "threw away" my votes on minor-party candidates. In fact, I voted straight ticket for a minor party.

Thank you Representative McDowell (Democratic incumbent in the state house) and Mr. Duggan (Republican challenger) for leading the charge with misleading attack ads that intentionally misrepresented your opponent. You both disgusted me so much that I exercised my right in favor of neither one of you.

Your example poisoned my opinion against the other main-party candidates as well. Good work.

How many of me?

I tried my birth name first:

This means that there's now only one person in the U.S. with that name, because I adopted my married name a mere six months ago. That lucky person. I'm jealous that she doesn't have to share her name with anyone.

And now for my married name.

I guess that should be updated to 16. The numbers are based on Census Bureau statistics, and as of the last census, I had a different name.

By the way, I'm kidding about all the Census Bureau stuff. They only take a survey, which means they have to be guessing about the names. Wouldn't a more accurate guess come from the Social Security Administration's name database?

I miss Husband. He left September 10 for a job 300 miles away. It's a short-term job, so it's not as though he's gone forever, but this week has been particularly hard because "They" (evil management) laid off the day shift on Monday. It would stand to reason that a layoff of the night shift (Husband's shift) would soon follow. Hooray!

Except reason is not involved in any decision They make. Husband is still working, and there's talk of stringing along the night shift until next Tuesday. This will not do. Husband has a job interview next Tuesday. He's supposed to come home to kill bugs and play with Baby and say funny things and protect us from any evil lurking in the darkened basement.

Written on Wednesday, November 01, 2006 by Jessica

Seth in his All Hallow's Eve attire. He's an ad for got milk? Thanks, Aunt Phebe, for the Superman candy bucket. 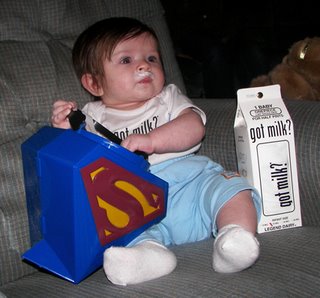