I bought a fancy-pants camera that arrived today. Battery is charging as we speak. Thanks, Lisa and Joanne, for the advice. I ended up going with a Nikon D40. I would've liked to spend more, but I just couldn't afford it. Heck, I couldn't afford what I did shell out. Christmas and birthday money made it all possible. :) 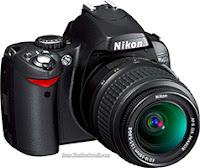 At my grandparents' house on Christmas Eve, we used to put hay under the tablecloth. It's a Polish tradition to symbolize the hay in the manger. We don't do it anymore, and that makes me a little sad. I suppose that since I never had to clean up the mess, I never saw the downside.

What is this world coming to?

DANBURY, Conn. -- A Danbury woman is facing charges that she groped Santa Claus at the Danbury Fair mall.
...
Police are not releasing the name of the man playing Santa, but they said he is 65 and felt badly because children were waiting to see him.

"He was apparently shocked and embarrassed by the whole incident," Myles said.

Pardon me for saying so, but isn't this supposed to be one of the perks of being Santa? There have be lots of Santas out there just waiting for some lonely MILFy goodness -- or maybe some almost-eighteen jailbait -- to jump up on his lap. Mrs. Claus must've been standing nearby.

I love spam. Sure, it's annoying most of the time, but every once in awhile I get a gem, like this festive acrostic for Mega Dick that passed through my inbox:

M
Eager to feel the taste of a holiday?
Get ready for more excitement and delight on New Year!
A

Don't be scared to make changes in your life-style!
I
Celebrate the New Year's day with a new bigger dic'k!
Keep in view all our special offers! Learn about this wonder-medicine now!

What's more fun than an acrostic where they couldn't come up with a line for every letter?

Funniest "you had to be there" joke ever

Let me set the scene. It won't help because, as I said, you had to be there.

Another coworker then chimed in with, "What does a tectonic plate say while riding on the back of a continental glacier?"

Hey, I already warned you that you had to be there.

A few days ago Seth and I were driving down the road when he spotted a pickup truck.

SETH: Caaaaarrrrr.
ME: Very good. It looks like a car. That's a truck. Can you say truck?
SETH: Yeah! [Implied: Ha! Not the response you were looking for, is it?]
ME: Say truck.
SETH: [Silence]

Now, I know the kid can say "truck" because he says it whenever he sees Baby Daddy's truck. He just likes to toy with me.

I'm totally buried in my offline life. I can't even keep up with reading other people's blogs, let alone writing in my own. I currently have 131 unread blog entries in my Bloglines account.