My sister wrote a little about free trials, so I'm adding my two cents. I hate it when you can sign up for a free trial online, but you have to call them to cancel it. Once time I signed both Bob and me up for a credit watch service. The whole point was to get free credit reports for the both of us. (This was back before the Congress enacted a law entitling everyone to a free credit report annually.)

Anyhow, I signed each of us up for the trial and naturally forgot to cancel. Then I discovered I'd have to call to cancel. I hate that! To make matters worse, they wouldn't let me cancel Bob's account. They had to speak to him personally. Hey, I signed him up. He didn't even know about the account, but he had to be the one to cancel. I didn't complain about it b/c I figured I must have agreed to terms of service stating that I was the person the account was being opened for. (Of course, nowadays I can just use my manly voice to impersonate him.) 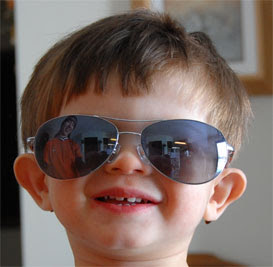 All the bad economic news is depressing me. However, I did read that even though we're approaching record-high gas prices (even when adjusted for inflation), the gas still isn't as expensive as before when you look at it in real terms:

Why doesn't that make me feel any better?

It turns out that President Clinton is actually an Obama supporter! :) Who knew??

McCain is your man

McCain vs. McCain: Who's your pick?

You can see the results here.

Sometimes these "heartwarming" stories are a bit too sappy for me but this one is truly interesting...

In 1986, Peter Davies was on holiday in Kenya after graduating from Northwestern University. On a hike through the bush, he came across a young bull elephant standing with one leg raised in the air. The elephant seemed distressed, so Peter approached it very carefully.

He got down on one knee and inspected the elephant's foot and found a large piece of wood deeply embedded in it. As carefully and as gently as he could, Peter worked the wood out with his hunting knife, after which the elephant gingerly put down its foot. The elephant turned to face the man, and with a rather curious look on its face, stared at him for several tense moments. Peter stood frozen, thinking of nothing else but being trampled. Eventually the elephant trumpeted loudly, turned, and walked away. Peter never forgot that elephant or the events of that day.

Twenty years later, Peter was walking through the Chicago Zoo with his teenaged son. As they approached the elephant enclosure, one of the creatures turned and walked over to near where Peter and his son Cameron were standing. The large bull elephant stared at Peter, lifted its front foot off the ground, then put it down. The elephant did that several times then trumpeted loudly, all the while staring at the man.

Remembering the encounter in 1986, Peter couldn't help wondering if this was the same elephant. Peter summoned up his courage, climbed over the railing and made his way into the enclosure. He walked right up to the elephant and stared back in wonder. The elephant trumpeted again, wrapped its trunk around one of Peter legs and slammed his stupid ass against the railing, killing him instantly.

I haven't even listened to the clip yet, but the headline is so funny that I just had to post it.

It's been twenty-three loooooong years, but I still remember so many details from the day you were born. Most are kinda gruesome, though. Childbirth just ain't pretty. :)

I was so happy you were a girl! Naturally, Samuel wanted a brother, but I won and got a sister.

Here's something I'm not sure you know. Mom and Dad had narrowed down the names, two for each sex. They told Samuel he could pick the name if it was a girl, whereas I could pick the name if it was a boy. (I guess it was like a consolation prize. "Sorry, do you didn't get the baby brother you wanted, but here, give your new sister a name!") The two girl names? Teriana and Corina. At the time, I liked Corina, so that's what I would've picked if it were up to me.

Looking back, I think Mom fully intended to name you Teriana no matter what. She already knew that Samuel wanted Teriana because I had first stated my own preference for Corina. (He always picked the opposite of whatever I picked. I liked Coke so he liked Pepsi. I liked Little Caear's pizza so he liked Pizza Hut.) Anyhow, because Mom knew he would pick Teriana, she told him he could be the one to pick your name if you were a girl. Clever, huh?