Quotation of the day

"Clinton lied. A man might forget where he parks or where he lives, but he never forgets oral sex, no matter how bad it is."
--Barbara Bush

A tale of two cakes

This is the one I made for Seth's birthday at Nana and Papa's house. That's an oyster on top. Honest... 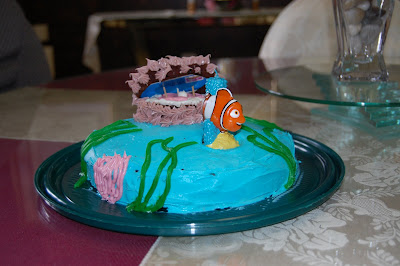 This is the one I made for Seth's birthday at Grandma and Grandpa's house. 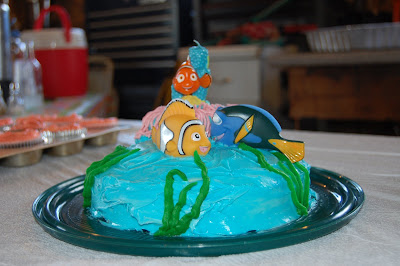 What can I say. They were made with love.

Here's that eighteen-month well-baby visit I mentioned in another post:

We arrived and three siblings were playing with the toys in the corner. Seth was thrilled. Kids! He rushed right over, and the two older ones (about three and five) were taken with him and started leading him around. The three year old started hacking up a lung, and that's when I realized one important fact about well-baby visits: Not all the kids are there for them.

What's worse, the mother was chatting on the cell phone, and I overheard her say, "Yeah, we're at the doctor's office. The nine month old has a terrible rash all over her body." What? The kid who is hacking up a lung is not even the reason you're here? The child crawling on the floor next to my son has a weird rash?

I vowed never again to go inside early so that Seth could play with the toys.

Seth is 36 inches tall and weighs 29 pounds, 9 ounces. He's in the 70th percentile for weight and the 90th percentile for height. Big boy. I have birthday party photos to post, but I haven't managed that just yet. Heck, I have a draft post about his eighteen-month visit that I never even finished. (90th percentile height and 40th percentile weight.) So yeah, I'm behind.

Most of you got refunds:

I got an email tonight from Hallmark. (Yes, I'm on their mailing list. Yes, I'm too lazy to unsubscribe.) The subject line: "Sneak a peek at NEW 2008 Ornaments!"

It's June and their offering me a sneak peek at this year's Christmas ornaments? I suppose I should at least be grateful that they refrained from actually using the word "Christmas."

Chester Oliver has sent me an urgent email to tell me that I can enlarge my penis by three inches.

Subject: You Can Enlarge Your Penis By 3"

Be the stud in 2008, and achieve all your dreams of super size!

Many surveys have shown that ladies prefer their man to have a huge manhood.

While I do indeed dream of super size (McDonald's, usually), that would give me an overall penis size of only three inches, which is more embarrassing than having no penis at all, so I think I'll pass.

Thanks for nothing, O'Connors Chrysler Dodge Jeep

We got our stimulus check in the mail today, weeks early! 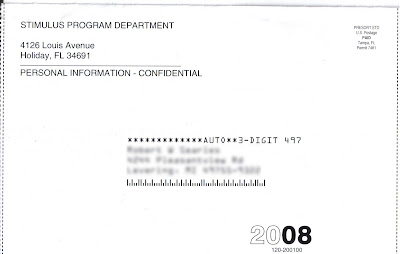 Except it's not my stimulus check. It's an ad from O'Connors Chrysler Dodge Jeep in Pickford, Michigan. Well, congratulations, O'Connors. Your stupid stunt worked. I noticed your flier and I opened it. Of course, you've royally pissed me off in the process. What good is that?

I'd really like the meet the marketing geniuses who came up with this plan. I guess there was a group of people sitting around a table in a room, and someone said, "I know. Let's piss off all the potential customers." Someone else shouted, "Brilliant!" and everyone else nodded their head in agreement.

Mental note: Never buy a car from O'Connors in Pickford.

Posted in Defy comprehension, How dumb can you get?, Rants | Comment Now!

Seth is approaching his second birthday, so I had his two-year portraits done. Here's a single photo for those of you who can't view the slide show below: And here's the slide show: