Years ago, I had a book of questions (in fact, I think that was its name, The Book of Questions) and one of the questions it asked was, "If you could take a pill that would allow you to sleep for only one hour each night and wake up refreshed, would you?"

Hell yeah! Never in my life have I wished I didn't have to waste so much time sleeping. (Yeah, yeah. I know. It's not wasted time. My body is recuperating and reenergizing. Whatever.)

So would you take such a pill?

When I saw the above headline, I thought, "Oooh, that sucks. I wonder what happened. I hope it's not something dumb like, 'Judge says woman must forfeit winnings because she let her minor son scratch off the ticket. State law says only adults can participate in the lottery by scratching off tickets.'" Here's what really happened:

A local woman must turn over her lottery winnings after a judge said she won them illegally.

Thought process continues, "Ah, illegal winnings. That explains it. I still feel a little sorry for her, though."

"Ohhhhh, now THAT'S a bummer. How unlucky can someone get? You finally buy a winning lotter ticket, but you do it with a credit card you're using illegally."

But then the truth comes out:

Goodenow asked lottery officials to keep her win quiet, claiming to be a victim of domestic violence. But police learned of the crime about two weeks later, as Goodenow continued to use the stolen credit card (my emphasis).

This idiot wins a million bucks but continues to use the credit card illegally. A million dollars isn't enough money for her to feel like she can cut and run?

Posted in How dumb can you get? | Comment Now!

I just learned about Sharing Point through Blue Girl and decided to join. If you're interested in trying new products and getting free stuff, you should join, too. Don't forget to mention me when you do. Yes, I get points if you join. :)

No Jane for me

It's his third haircut in six months!

Here we are this morning with a mop: 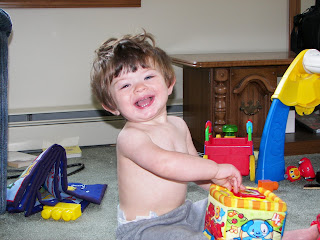 Here is after the cut: 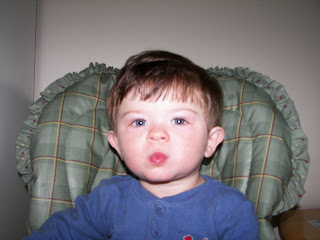 This is after the cut AND after the bath to wash out the loose hair. It's not nearly as short as I expected it to be. Maybe next time we'll cut it even shorter. 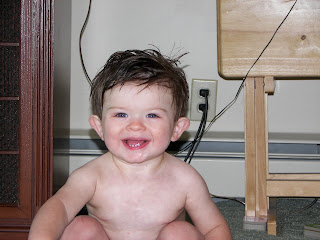 I'm signed up to receive breaking news e-mail announcements from CNN. This morning at 12:05, I received word that Barry Bonds had broken the all-time home-run record.

This wouldn't have bothered me except for the fact that I did not receive breaking news announcements after the recent Minneapolis bridge collapse and Utah mine cave-in. CNN's priorities are out of order.

I'm completely intrigued by this video game, Pride and Xtreme Prejudice. I think it must be a joke -- a parody that someone made and posted on their site. There's no telling how it made Google. Nothing links to it (until now). But if it were real, I'd totally buy it. A Jane Austen video game! How cool would that be?

By the way, if you have Bloglines or another RSS aggregator, you might notice some really old entries popping up on my blogs. That's only because I added labels to a couple of really old posts. As a result, they might show up as new in your aggregator.

I've entered to win this sweet TV from www.5minutesformom.com and Best Buy. You should enter, too!

So on August 10th, I will trek to the theater see a fictionalized account of Jane Austen's life. I'm sure I'll be dismayed by the liberties the movie takes with known facts about her life, but it's Jane, so I'm compelled to go.

Anne Hathaway says the pressure of playing Jane almost made her quit the part:

"A lot of people put pressure on me. I put a lot of pressure on myself," Hathaway said in an interview. "There was a time when I considered stepping away from the project because I really didn't want to fail."