I think the pumping has really helped to increase my milk production. (Ideally, I would allow him to suckle long enough to increase production, but that hurts too much.) I'm going to have to start wearing nursing pads to bed. If not, I'll have to collect a bunch of kittens to follow me around and lap up the puddles of milk!

Today I draped Seth over the boppy for his tummy time and put some toys out in front of him. When I wasn't looking, he grabbed one of them. He's such a smart boy. :)

On Sunday morning, Bob took Seth into town so I could sleep. That's what I did. For nearly six hours in a row. I was still tired when I woke up.

The visit with the lactation consultant

For starters, Seth was on his best behavior. Rather than ravenously attempting to eat his hand (he always attempts to latch onto his hand even as I offer a milk-laden breast in vain), he merely nibbled at his hand, as if to say, "Mother, I'm peckish. If you have a moment, please feed me." Plus, he latched on beautifully. Why can't I get him to do that at home? What's more, he opened his mouth wide, never once lunging at me when I didn't put him to breast immediately. (Seriously, the kid has a strong neck.)

I confessed my sins -- using a pacifier and bottle-feeding with the Haberman nipple -- to the lactation consultant, Judy. She didn't even chastise me. Probably because I looked so ashamed. Her evaluation? Says the latch looks very good from the outside, which probably means he's not suckling correctly. This could be due to nipple confusion or it could be the way he's always suckled. There are ways to train/retrain an infant to suckle correctly, but she said that was beyond her expertise. As the saying goes, "I made my bed. Now I must lie in it." (She didn't say that, but that's my interpretation.

She said my nipples' turing white were caused by Reynaud Phenomenon.

Thanks to S. and the website she referred me to (kellymom.com), I know that I don't suffer from Reynaud's. I do experience nipple blanching -- which can be caused by Reynaud's -- but in my case, I'm actually experiencing compression blanching. I frequently have a compression stripe, which I found I can minimize by trying harder for a good latch.

Judy pointed out that even though we started out with what looked like a textbook latch each time, Seth tended to reposition himself, which was causing more pain. This made sense. Even when I start out with a relatively pain-free latch, I usually end up wincing in pain by the end of the session. (Plus, the little vampire tends to suck harder at the end when the milk doesn't come as fast.)

We also got creative by trying out a nipple shield. Nipple shields are usually intended for use when the baby has latching and feeding problems (such as with preemies), but it seemed to help alleviate the pain a little.

1. Make sure he opens wide so I can get a good latch. If he repositions later in the feeding, be sure to break the latch and start again. (This is probably my worst problem. As the pain increases throughout the feeding, I tend to grin and bear it, thinking, "It's almost over. It's almost over."

2. If desired, use the nipple shield when nipples become really sore.

3. When soreness becomes intolerable, pump instead of nursing.

I know one thing fore sure. If I ever have another kid, s/he's not getting a pacifier or a bottle (not even a Haberman) until I'm sure nursing is going well. By that time, s/he probably won't even accept a bottle or a pacifier!

Well, my little guy is working on filling his diaper. He's working really hard, too. Lots of grunting and groaning and straining.

A nurse from the health department came a couple of weeks ago for a home visit, and I asked her if it was normal for a kid to have to always work so hard to fill his diaper. I know that every kid has to once in awhile, but with him it's every time. She said, "Well, when I was undressing him to weigh him, he was doing a lot of grunting then. I think he's just a little dramatic."

Wait a second. Did she just call my son a drama queen?

I'm a breastfeeding failure. My nipples are horribly sore, probably due to nipple confusion -- which of course is my own fault, because I opted to bottle feed what I'd pumped instead of using the SNS (supplemental nursing system). Granted, we used a special nipple called a Haberman, which is designed to mimic breastfeeding, but it's not the same. I guess I was so grateful to Bob for his help with night feedings that I didn't want to ask him to use the more time-consuming SNS -- which is stupid b/c he would have used it without complaint.

Worse, I gave into pressure to use a pacifier. I didn't want to seem like a paranoid first-time mom.

No surprise that my milk production isn't enough. I make enough in the morning, but it declines all day long until finally he's waking up every hour to eat during the night. (It's amazing how many parenting decisions are influenced by fatigue. I don't think I would've used a pacifier if not for being exhausted. Now I'm paying for it.)

Even though I wasn't looking forward to breastfeeding, I never expected to be bad at it. I read the blogs of lots of successful breastfeeders, and I just don't know how they do it. I want to blame other factors: the c-section, which prevented me from establishing breastfeeding immediately; NICU for giving him a pacifier and bottle; the pediatrician, who prescribed formula while he was in NICU. But it's no use. I'm a breastfeeding failure, and it's no one's fault but my own. It's a miserable feeling.

Seth can hold his head up really well considering that he's only three weeks old. Bob's a proud papa b/c his little man is so strong. :)

Sleep when the baby sleeps

Yeah, right. I can't believe my insomnia has followed me to motherhood. The kid has been sleeping for hours on end, but me? I've been staring at the ceiling. I keep thinking, "His diaper must be so nasty by now. I'll bet he's soaked right thru. Why is he still sleeping? Is something wrong? Is he breathing? [Child makes grunting noise.] Yes, he's obviously breathing. Why is he still sleeping?" I wonder if all first timers are this fretful. 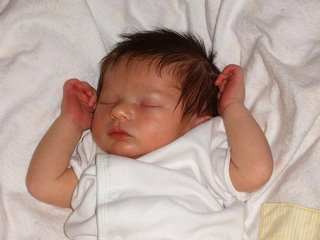 What I love about Seth

Sappy post. I'll try to keep these to a minimum. :)

1. All his hair.
2. His cry. I think it's so cute. I hate to admit it, sometimes I let him cry just a little so I can hear it. (Wait'll he gets some lungs behind his cry. I'm sure I'll change my tune.)
3. His faces. He had about a thousand different faces. They crack me up.
4. He's so little. I'd always planned on an eight-pound baby, so I was surprised when he came in under seven.
5. He yawns and stretches all the time. Three or four times in a row. Love it.
6. How cute he makes his daddy look. What is it about your husband holding a baby that makes him look so adorable?
7. The way he sleeps with his hands up by his ears.
8. His cute little cowlick. It makes his hair stick up all over. I'm sure it'll drive me crazy when I try to tame it when he gets older, but for now I love it.

I wrote all about his entrance to the world on my other blog:

Follow the links to see some of his first photos.