Yesterday we packed, today me moved, tomorrow we move in. I've promised to post photos before now, but I've never done it. I really need to post photos, but geez, dial-up is such a pain.

Worst mommy in the world

In a show of solidarity with S., who wonders if she's the worst mom ever, I thought I'd reveal my secret reasons for believing I'm the worst mommy in the world:

Bad mommy episode #1:
When my sweet baby boy was tiny and new, a mere nine days old, I dropped him. That's right. I dropped my baby, which officially makes me a worse mother than Britney Spears.

In a moment of utter exhaustion, I fell asleep while rocking him. He slipped from my arms and fell to the floor. As you might imagine, I burst into sobs at least as loud as Seth's. Thank god for Bob, who rushed out and took over. He blamed himself, saying he should've been helping more. He conveniently forgot that I'd been declining his offers to help. I don't know how single moms do it.

Bad mommy episode #2:
Just yesterday, the pediatrician recommended I eliminate dairy from my diet for three days to see if that's what is causing Seth's sour tummy/gas. And what did I do today? Bought a quart of chocolate milk and drank it all. I rationalized it by saying that cutting back was better than ignore the doctor completely. (Yes. Believe it or not, a quart of milk in a day is considered cutting back for me. I usually drink a half gallon or even more. Is it any wonder that Seth is having problems?)

Here's Seth in his ducky bathrobe from Great Aunt Eileen. 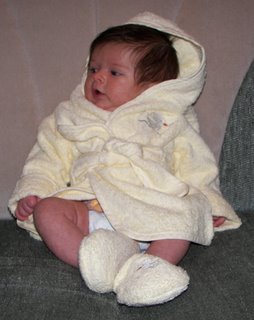 Because I apparently take all the photos in the family, I have a VERY limited selection of photos of Seth and me. Here's me first thing in the morning (after being up all night, of course) with an always-cute Seth.

Someone buy this girl some makeup.

Along with a few million other special elite people, I've been invited to participate in Google's beta reworking of Blogger. As a result, I've had to revert to the ugly orginal template. Sorry. Notice, however, that the beta integrates labels, so I won't have to do them manually through del.icio.us anymore.

Once upon a time, in a life that seems far away, Seth had a plethora of ways to tell me he was hungry:

1. Attempt to devour his hand.
2. Root around the bosom of some unsuspecting (and mortified) thirteen-year-old girl who is holding him.
3. Smack his lips.
4. Try to latch onto air (my personal favorite).

Nowadays, I bet you can guess how Seth tells me he’s hungry. Yup, that’s right. He screams.

Now, don’t get me wrong. I don’t necessarily have anything against screaming as a method of communication. The problem is that screaming can mean so many other things besides, “I’m hungry”:

In any case, I'm starting to get used to dealing with trial and error every time he cries.

I had to throw out all the milk I've pumped and refrigerated/frozen over the past two days. Seth was absolutely fine drinking formula. He was fine while nursing. He was completely fine until I reintroduced the breastmilk I stored. After that, he spent the rest of the evening screaming. Do babies get sore throats? I feel awful for feeding him something that put him in such misery.

My sweet baby boy is experiencing colic-like distress. It's certainly not true, full-blown colic, but it doesn't leave me any less heartbroken as he screams inconsolably.

We've begun narrowing it down. It's not the formula. (I still supplement b/c my milk drops inexplicably about every third day.) The next step is to begin eliminating foods from my diet since something is probably creeping into my breastmilk and causing havoc. First, I'm going to eliminate caffeine. This won't be hard b/c I quit caffeine about three years ago. I accidentally drank some last Friday and Sunday when I had Sunkist orange pop (that's "soda" or "soft drink" to you non-Midwesterners). Because Sinkist is orange, I incorrectly assumed it didn't have caffeine. Seth's distress seems to have coincided with the introduction of caffeine. (Fingers crossed, as it's an easy fix.)

If his colic continues, the next step is to cut down or eliminate cow's milk. Let's hope we don't have to take this step. I LOVE milk.