Seth had an allergic reaction to amoxicillin and was covered in hives. Fortunately, he wasn't as miserable as he looks. (The scab under his nose is actually from being dropped on his face a couple of days earlier and has nothing to do with the hives. Poor baby. As parents, Baby's Daddy and I are unfit.) 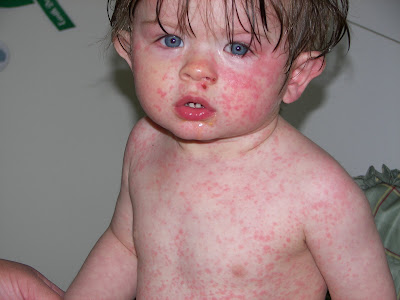 I found this on Lisa's chaotic site. Turns about I'm quite family friendly.

This rating was determined based on the presence of the following words: 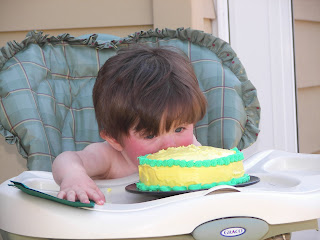 We had sixty-five people over for his party. I must be insane.

You'll notice a predominance of photos of his little cake, which I decorated myself, thank you. I ended up running out of battery. I have to depend on others for more photos.

I have a walker on my hands! Yesterday is the date that will officially go in his baby book as the day he started walking. He's taken a few steps in the past, but yesterday he started walking all around the room. He was so excited! Baby's Daddy and I were excited, too.

My grandma thought she had the wrong cell phone number because she thought I sounded like a man.

As Sherri pointed out, I should look at the bright side: at least people don't mistake my voice for a child's. Plus, no one ever mistakes me for a man in person. That would be infinitely worse.

I don't like my voice. It has always been low -- often described as "sultry" -- but during pregnancy, my voice deepened further.

While pregnant, I attributed my lowered voice to pregnancy rhinitis -- a perpetual stuffy nose that lasts way longer than described in the article. I knew the rhinitis would eventually go away, and I expected that my voice would return to normal also.

I was wrong. I sound like a man. When people call the house, they mistake me for Baby's Daddy. A few of months ago I ordered a pizza, and the order taker asked, "And what's your name, sir?" I gave him my husband's name. I had no desire to explain, "Actually, I'm a ma'am."

Just now, I got off the phone with a client who said I sound like a man on the phone. He couldn't leave it at that, either. He had to repeat by adding, "On your cell phone you sound like an adult male."

I didn't mind it while I was pregnant because I expected the condition to go away. But now I know it'll never go away. My voice is permanently deeper than it used to be, and I permanently sound like a man.

"Lady sounds like a dude" doesn't have the same ring to it as, "Dude looks like a lady." I'm becoming really sensitive about the subject, too. Whenever someone mistakes me for a man, it's deflating. It ruins my day.

I've thought about doing audioblog posts, but I don't want anyone to hear my voice. I'm not sure why it bothers me so much, but it does. Once upon a time, I wouldn't have cared at all.