Today I'm wearing a belt that didn't fit six weeks ago. Yay me.

I've been a bad blogger lately. Who has time to post blog entries?? Not I. I think I might try to set up some sort of audioblog so that I can talk while I drive. Not that anyone would want to listen to me talk.

Seth is getting big! He's taking one or two independent steps between furniture objects and occasionally standing unassisted.

I received clearance to start working two days a week from home. The gas money I save will be a boost for the ol' pocketbook.

I desperately need a new computer but can't afford one now that I've spent $3500 this year on DENTAL WORK (two crowns, root canal, various fillings replaced)! My sister is getting her wisdom teeth removed, so I guess it's in the water.

For Mother's Day, Seth and Baby's Daddy gave me a tree. Crimson King Maple. I love making Baby's Daddy come up with his own gift ideas because his desperation always sparks real creativity.

Yes, it's true. This photo and others have been languishing in my camera for over a month. 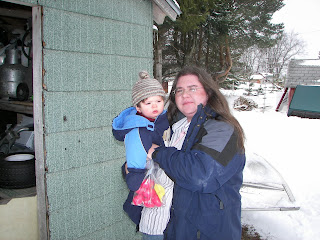 To see the rest of our snowy Easter egg hunt, go here:
http://picasaweb.google.com/hunsford/2007EasterEggHunt

I've mentioned before how much I like country music, especially because of all its redneck quirkiness. Even so, nothing could prepare me for Brad Paisley's latest.

Now, Brad has brought us funny greats like, "I'm Gonna Miss Her" (a song about an avid angler whose wife's ultimatum -- "it's either me or the fish" -- backfires on her) and, "Alcohol." I love Brad!

But this time, even I'm horrified:

You know every guy in here tonight
Would like to take you home,
But I've got way more class than them.
Babe, that ain't what I want.

Dear god, what's country music coming to? Brad Paisley's latest song is, "I'd Like to Check You for Ticks." The worst part is, I know that there are Paisley fans everywhere who are saying, "Brad, you can check me for ticks anytime!"

The results are in

More results from my most recent Downright Newsworthy Poll.

Are you trying to lose weight?

My own diet is going pretty well. So far I've lost eleven pounds. My long-term goal is 140 pounds. Well, actually, my goal is a size 10, which I think will be roughly 140 pounds. After that, I'll think about getting down to a size 8.

I really need to pick up some healthy snacks. I've been dieting for three-and-a-half weeks, which means I've been hungry for three-and-a-half weeks. I'm beginning to feel true sympathy for the likes of Anna Scott (Julia Roberts) in Notting Hill, who said she'd been dieting since she was 19, which meant she'd been hungry for a decade. If I'd just get some low-calorie snacks, maybe I wouldn't be so hungry.

"America believes in education: the average professor earns more money in a year than a professional athlete earns in a whole week."
- Evan Esar

My sister is coming for a visit in November. I hope she remembers me long enough to say hi.