Written on Wednesday, February 28, 2007 by Jessica

You've just taken the last bit of coffee from the office kitchen. You're all alone. Do you make a new pot?

50% Yes, of course. (Because Jesus and Santa are watching.)
30% Sionara, suckers! Make your own coffee.
20% It depends on how late I am for my meeting.

My sister tells me that she accidentally voted for the wrong answer. In her mind, the question, "Do you make a new pot?" can only be answered, "Yes, of course I don't."

Blast from the not-too-distant past

...to participate in my Downright Newsworthy Poll (to the right, below my profile). Of course, before I threaten to tally the results, maybe I should line up something at least mildly interesting for the next poll. Any suggestions?

1. What curse word do you use most often?
Bugger. Not sure if it really counts as a curse, which is why I say it.

2. What profession other than yours would you like to do?
Editor or novelist.

3. What is your favorite word?
Sundry.

4. What is your least favorite word?
Snot.

5. What would you like God to say to you when you enter the Pearly Gates?
Don't believe in Pearly Gates.

Today is Pączki Day (pronounced: pɔntʂkʲi) here in the U.S. You might think it's Fat Tuesday, but noooooo, not in Michigan.

A pączek (singular form), which is a traditional Polish doughnut, is really just a glorified jelly doughnut, but they're good. And seeing as how I'm Polish, I'm morally obligated to celebrate by eating a couple of them today.

We never celebrated Pączki Day when I was growing up. I never even heard of it until I was in my midtwenties. I'm not quite sure how that happened because I grew up in a Polish family in a Polish town. Maybe it was intentionally overlooked because so many of my Polish family members are forever dieting.

I watched Sherri's kids on Saturday and Sunday. Her little guy, Thomas, is quite the little helper, frequently informing me of Seth's current status:

And my favorite, when he spotted a bunch of drool on Seth's chin:
"Jessica, your baby's dripping."

Best pic so far of the teeth

You can barely see them. I'm a little disappointed. I thought this photo of his pearly whites was going to turn out better. 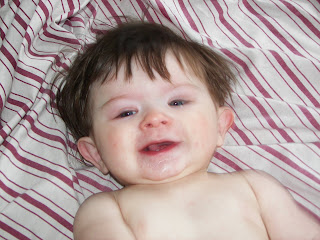 Looks fine here. But it's a camera trick. 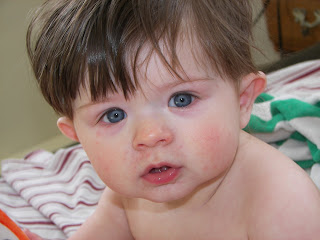 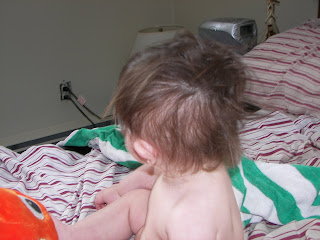 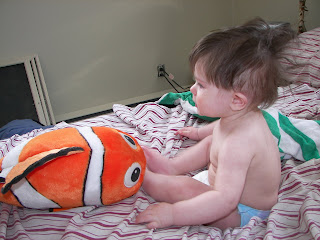 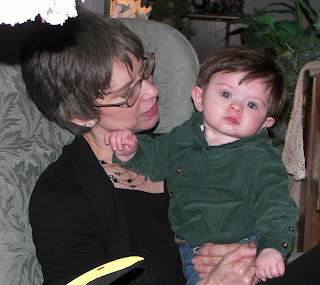 I mentioned in a comment that I really buggered up my car when I spun out and put it in the snowbank this morning. Damage includes:

My car is sitting in the Rite-Aid parking lot until Monday. Baby's Daddy is out of town this weekend. He will retrieve the car on Monday and fix it.

When I drove the car immediately after the accident, it was a rough ride -- as you might imagine, since I had a flat tire and probably a bent tie-rod end -- but I just thought I had snow in the wheel well. And actually, I don't think the tire was flat at that time. It still had air that evening when I left work.

UPDATE: The wobbly front tire is caused by a bent wheel, not a bent tie-rod end. Good news because a bent wheel is easier and cheaper to fix.

A few months ago Seth did his first meme. Now we've redone it because he's getting to be such a big boy and all the answers have changed.

3 Things That Scare Me
1. Snowblower. It's loud.
2. The mini chopper that Mommy uses to make my food. It's loud.
3. Grandma when she tries to imitate a cat. It's loud.

3 Things I Hate
1. The mere thought of falling asleep by myself.
2. The eternal wait for Mommy to get that milk maker out. I can't figure out why it takes so long.
3. Lying down. I can sit up now, and that's exactly what I want to do!

3 Things I Don’t Understand
1. Why it takes Mommy so long to break out the milk maker.
2. Why no one wants to change my diaper anymore.
3. Those funny signals Mommy and Daddy make with their hands. If I want food, I'm going to open my mouth like a baby bird, not make a signal with my hand.

3 Things I Can’t Do
1. Roll from my back to my stomach. I don't like being on my stomach, so you can't me roll that way, either.
2. Crawl.
3. Pull myself up to a sitting position.

3 Things I Think You Should Listen To
1. Music on TV.
2. Me as I play with the piano Nana and Papa got me for Christmas.
3. Me.

3 Things I Think You Should Never Listen To
1. The snowblower.
2. The mini chopper.
3. Grandma's cat noises.

3 Shows I Watched as a Kid
1. Anything musical.
2. Anything noisy.
3. Anything Daddy watches.

On a curvy stretch of road this morning, I spun the car around 450 degrees and planted it in a snowbank. (Disclosure: Seth was not in the car.)

It happened pretty fast, but I had enough time to form several thoughts though: "Too fast. I hope the car doesn't flip when I hit the snowbank. *WHAM*/*CRASH* Did a window just shatter? [Still spinning.] *THUD* [Car comes to rest.] Shit." It then occurred to me that Baby's Daddy was ice fishing and would be very unhappy about having to drive down to get me out.

I got out of the car and looked as the road. It had a slimy coating of snow and salt and dirt. Slippery stuff. You can't see it, but I should've know better. The car's nose was in a snowbank. The ass end was hanging out well into the lane. My situation had actually been better while I was still spinning. Now I was in danger of being hit by other cars. In fact, I nearly did cause an accident because one car slowed down and the SUV behind him nearly hit him while spinning a 180.

A minivan full of skiers stopped. A dad and three teen boys jumped out to push. Then a pickup with a couple of guys stopped to offer a tow rope. My heroes.

"It is a truth universally acknowledged, that a single man in possession of a good fortune, must be in want of a wife."
--Jane Austen, Pride and Prejudice

This is just another Austen rant, so you're forgiven if you can't bear to plow through it.

I'm beginning to suspect that Linda Berdoll, the author of Mr. Darcy Takes a Wife, a so-called sequel to Pride and Prejudice, never even read the novel. Is it possible that she might skip the novel in favor of the miniseries, as do so many literature students? It's as if she read the first several chapters to familiarize herself with Austen's style and then tossed it aside. Her brief bio admits that "her interest in all things Austen was piqued by the BBC/A&E mini-series."

Certain telltale signs reveal that her story builds upon the miniseries, not the novel. For example, Mr. Collins is described as having "a perpetually most upper lip" which he must dab with a handkerchief drawn "from his sleeve." This characteristic doesn't exist in the novel, but in the miniseries we do in fact see him running around with a handkerchief in his sleeve that he uses to dab perspiration. And thus far, there is no mention of Mr. and Mrs. Collins's baby -- alluded to in the novel by a reference to a "young olive branch." The young olive branch might have been noted in the miniseries, but if so, Berdoll obviously overlooked it.

And the most aggregious violation of all, the one that prompted me to rant in this post: After Miss Darcy publishes a novel in Mr. Darcy Takes a Wife, Mr. Collins beings to fawn all over her, as if the publication of a novel gave her prestige. (Obviously it does not, because she is forced to use a pseudonym. The publication of novels is inappropriate for ladies.) He even produces storylines that he hopes she'll use in her future novels. This is completely opposite Mr. Collins's established character. In the orignal novel, he offers one night to read to the Miss Bennets. Someone suggests a novel, but he "protested that he never read novels." Novels were looked down upon as degenerate, especially by the clergy, who thought the racy storylines corrupted the sensibilities of the congregation. Therefore, Mr. Collins would have been quite disturbed to learn that Miss Darcy had taken to writing novels and would have "most strenuously advised against it," I am sure.

Someone just mentioned one I haven't heard in twenty-five years:

So so suck your toe
All the way to Mexico.
While you're there
Cut your hair
And don't forget your underwear.

What about you? Any good childhood sayings you remember?

The other white milk

I didn't even know which blog to post this on. "Defy Comprehension" won: The other white milk.

How to prank a telemarketer

Turn up the sound!

I didn't even warn anyone that I was heading down to Indiana for my cousin's wedding. I'm back now, so posting shall resume.

Here's something I never knew before: There are no direct routes via expressway from my home in Michigan to Indianapolis. Yahoo maps suggested a lovely, roundabout route along Lake Michigan and through Gary, Indiana. (This time of year, "lovely" is sarcastic due to lake-effect snow.) Google maps suggested a much straighter inland route through Fort Wayne, which was unfortunately rendered impractical due to a stopover in Grand Rapids, Michigan.

Baby's Daddy and I ended up driving a several hours down a divided highway complete with traffic lights and 35-mph speed zones. Not the best choice we ever made, but not the worst, either.

Husband's note on refrigerator for wife:

"Someone from the Gyna Colleges called. They said the Pabst beer is normal. I didn't even know you liked beer."

You just know someone came up with that joke after her husband really thought "gynecologist" was "Gyna Colleges."